Our site uses cookies to improve your experience. By continuing to use this site, you agree to the use of cookies. You can change your preferences and find out more by clicking here.
Accept

Stay in the loop with the newest updates, learn more about ventilation and get £25 of your first purchase.

Thanks for signing up! Here is your £25 voucher, enter this on your checkout: 25OFF-BHYTG2
Oops! Something went wrong while submitting the form. 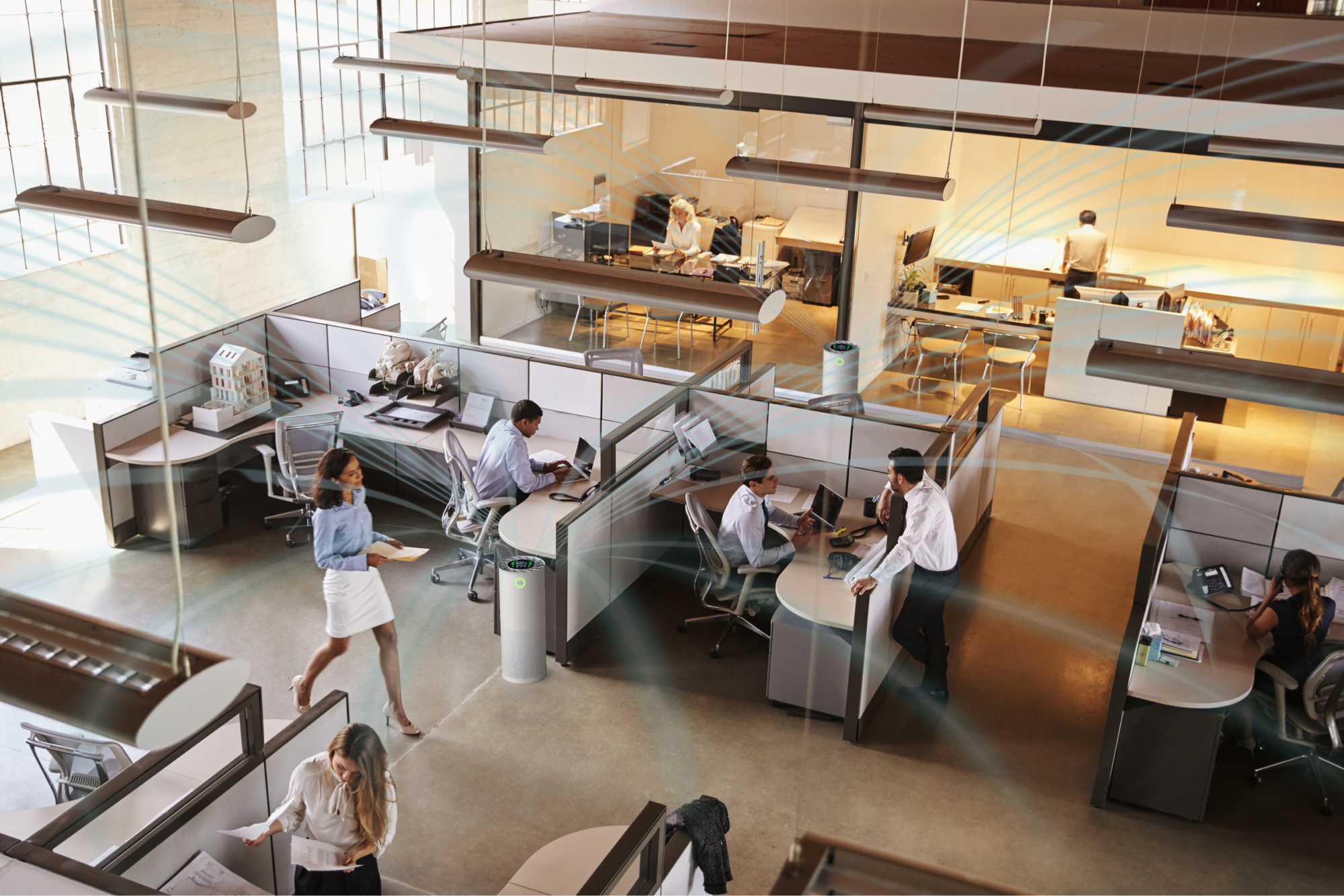 1. Reducing the transmission of airborne pathogens.

Many viruses (e.g. novel coronavirus) and other pathogens are so small that they are able to remain in the air for extended periods after someone sneezes, coughs or talks. Thus, the removal of such impurities from the air is essential in order to avoid transmission of these tiny droplets from pers onto person. By introducing air purification, 99.99% of impurities can be eliminated from air, vastly reducing the risk of transmission. Benefits include the reduction in transmission of infectious diseases including viruses, bacteria and fungi, as well as the reduction of health concerns associated with high levels of VOCs or a complex combination of VOCs within the air.

Numerous studies have affirmed a positive relationship between improved air quality and cognitive functional abilities.  A 2015 Harvard study saw 24 participants spend 6 full working days in an artificially controlled office environment. Participants were uninformed as to the varying levels of air pollution present within their workspace and were required to undertake tests to evaluate their cognition on various days over the period. The scores resulting from such tests were found to be 61% higher on days where the indoor air quality was good i.e.  contained low concentrations of pollutants, as opposed to days during which high concentrations of such pollutants were present.

A paper reviewing the available literature on productivity in relation to air quality found that improvements in indoor air quality by a factor of between 2-7 lead to significantly improved office productivity.  Interestingly, even when the air  quality is  only  ‘perceived’ to  be  better, levels  of  effort undertaken  by employees  on text  typing  and calculation  tasks  within an  office  environment were observed to be significantly higher

4.  Reduced absence of workers from the workplace

Increased ventilation, allowing for improved circulation and thus improved air quality has been shown to significantly decrease the absence of office workers. One study found that for each 1 l/s increase in ventilation, short term absence(defined as<50% of a year) reduced by 2.9%.

Low air quality is commonly found within the context of  a school  setting. This is  commonly attributed  to  efforts sur-rounding saving energy; however, such negligence should be considered of higher priority  given  the well-established  harmful  relationship between  poor  indoor air quality  (IAQ)  and a  child’s  ability to  learn.   Children are also  widely considered more vulnerable to environmental pollutants, leading to widespread findings of ‘sick building syndrome’ throughout school settings. One paper studied classes of 10-year-old children, measuring the impact increased airflow would have on the children’s performance of schoolwork.  When teachers issued identical performance tasks which mimicked various aspects of school work, a doubling of air quality within the classroom was seen to increase performance observed by 15%It is clear, therefore, due to the many prominent benefits of breathing high quality  air,  that air  purification  is not  a  knee-jerk reaction  to  the ongoing COVID-19 pandemic, but instead is a long-term investment in the health and confidence  of  workers and  the  general public  utilising  an indoor  space.   Furthermore, studies  show that  the  cost associated  with  implementing units  to improve indoor air quality is far lower than the monetary savings released from the multiple benefits of improved health, reduced absence and productivity.

What is a HEPA filter?

The Indoor Air-Purifier– With A 99.9% Efficiency At Killing Airborne Diseases